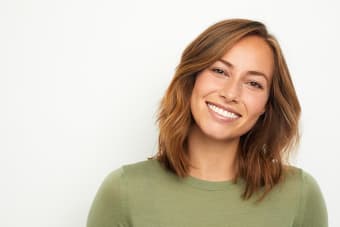 It’s important to know what healthy gums look like so that you can better prevent gum disease from developing. Our Surrey & Delta dentists describe some of the ways that can tell the difference between healthy gums and unhealthy ones based on appearance.

Although most people have pink gums, healthy gums actually come in quite a wide range of colours. Some can be very pale pink, and others can be more toward brown or even black. As you might expect, darker coloured gums are more common in people who have darker skin tones.

But there are some colours that may indicate gum disease. Gums that are bright red, white or unnaturally black can be a sign that gum disease has developed. If your gums have perceptibly changed colour, you should definitely get them checked out by your dentist.

Healthy gums should be firm to the touch, and fit snugly around your teeth.

Unhealthy gums, on the other hand, often look and feel puffy and are noticeably malleable. They may feel mushy and somewhat tender to the touch, and may begin to pull back away from the teeth (this is called gum recession).

Healthy gums do not bleed during brushing or flossing. If your gums bleed when you brush and floss, it could be a sign of gum disease.

If you are concerned about your gum health, we can help. Contact our Scott 72 Dental dentists for an appointment today!